Optical spectroscopy of crystal nucleation one nucleus at a time

Crystallization is an important process in many science and industry disciplines. Despite decades of dedicated research, the fundamental understanding of crystal nucleation at the molecular level is yet to be established. Recent studies agree that the process of crystal nucleation is more complex than what is described by the classical nucleation theory. In-situ optical spectroscopy has the potential to gather complex information from nucleation dynamics. The stochastic and heterogenous nature of crystal nucleation, however, has limited its application in the past. While not yet applied in this field, single molecule spectroscopy is a powerful and well-established concept to tackle the study of stochastic, complex, and heterogeneous systems. If the location of nucleation is precisely predicted, optical spectroscopy can be used with its full potential by probing single nucleation events at a time.

In this work, we present the development of Single Nucleus Spectroscopy (SNS), aimed to perform in-situ optical spectroscopy on crystal nucleation. SNS is based on a novel combination of Raman micro-spectroscopy and optical trapping induced crystallization (OTIC). OTIC was first demonstrated by Sugiyama et al. in 2007 by focusing a near infrared (NIR) laser in a supersaturated glycine/D2O solution. In our approach, we apply OTIC to spatially control a single nucleation event at the focused laser spot, while simultaneously measuring the Raman spectral evolution. We achieved the measurement of the Raman spectral evolution of a single glycine crystal formation, in aqueous solution and at room temperature, with a time resolution of 46ms. Measurements of Raman spectral evolution during single nucleation events, analyzed by a non-supervised spectral decomposition technique, showed that the nucleation occurs in a non-classical mechanism and led us to uncover the Raman spectrum of pre-nucleation aggregates. The agreement between the simulated and experimentally extracted spectra of pre-nucleation aggregates, allowed us to assign loosely-bound linear chains of glycine, as likely precursors of crystal formation. These results not only provide us more details about the early stages of glycine nucleation, but they also highlight the power of SNS as a platform to study crystallization problems by means of optical spectroscopy. 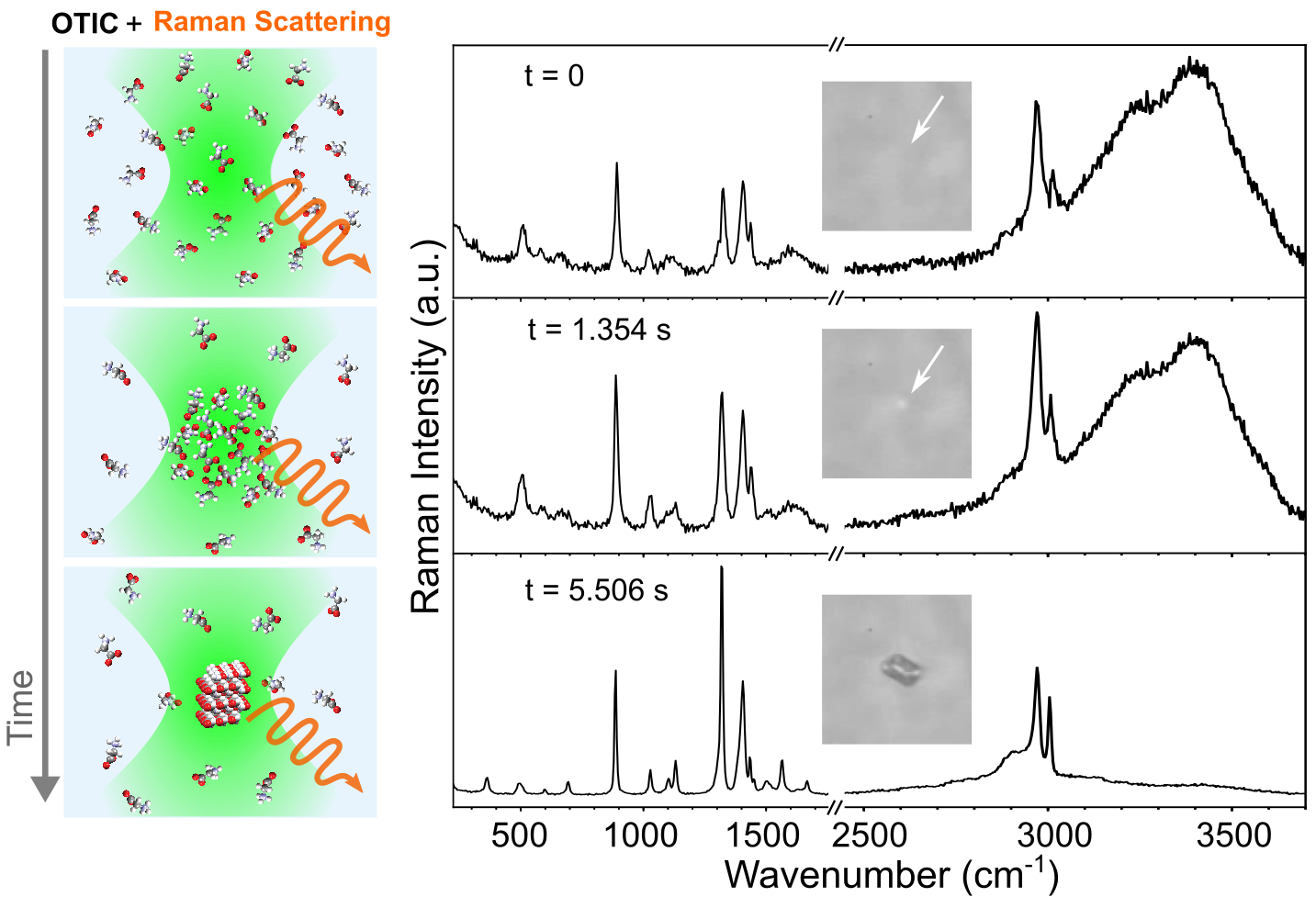